As an Amazon Associate I earn from qualifying purchases. This post may contain affiliate links. See my full disclosures, Terms of Use, and privacy policies on my "privacy" page. I never recommend a product I don't love. 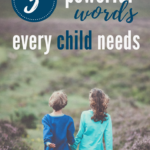 Let’s talk about the Biblical importance of forgiveness for kids!

Imagine this very common scene with me:

Olivia and Jack are playing together. They squabble, as kids tend to do when doing anything together. During the fight, Jack whacks Olivia on the head and Olivia starts crying. A few minutes later, the fuss has calmed down, and Jack says to Olivia, “I’m sorry for hitting you.”

What does Olivia say?

Is that really what she should be saying at that moment? “It’s okay that you whacked me on the head? Go ahead, do it again anytime, because hey, it’s okay!”

If you’re anything like me, you’ve coached your kid to say this at least once, but really, the words are meaningless, aren’t they?

Assuming that “next time, I’m gonna kick your teeth in” isn’t a reasonable alternative, what should be said instead?

“I forgive you” is the most powerful phrase you can teach your child, even more powerful than “I’m sorry”. Why? Because forgiving others is key to the Kingdom of God.

Jesus claims that we can’t even be part of his Kingdom unless we forgive others.

He told us to forgive 70×7 times, and he exemplified this preposterous level of forgiveness daily. He forgave the best friends that betrayed him, the religious leaders that riled up a crowd against him, and even those who mocked him during his most excruciating pain.

Forgiving others isn’t optional in the Kingdom of God.

Why? Because unforgiveness creates a poison in our souls, a poison that grows and damages our souls until we become bitter, vengeful people. Only when we forgive can we truly be free of the poison.

I can hear you protesting loudly.

What if Jack’s apology isn’t genuine? Should Olivia still say “I forgive you”? Is forgiveness for kids even REAL?

Yes, because forgiveness is a HUGE part of the process of reconciliation, which is a process my children need to learn in order to be healthy adults.

There are stories in the New Testament where people came to Jesus for physical healing, and he told them that their sins were forgiven. Everyone in the room stared, flabbergasted, with raised eyebrows because it was so unexpected.

Jesus’ penchant for unrequited forgiveness caused quite a stir amongst the Jews.

Even in the familiar story of the prodigal son, it can be argued that he wasn’t actually repentant until he felt his father’s love and forgiveness.

Why did Jesus extend such gracious forgiveness to people who hadn’t even said “I’m sorry”?

He was turning the traditional ideas about forgiveness on its head. Under human rules, someone should only get forgiveness when they deserve it. But God doesn’t follow our rules, which is good thing, because none of us deserve his forgiveness. His forgiveness precedes our repentance. In fact, Romans 2:4 tells us that this is no mistake.

In the upside-down Kingdom that Jesus came to bring, God’s kindness is actually intended to lead us toward repentance. Forgiveness and kindness first, repentance second.

So yes, Olivia should still forgive, even if Jack hasn’t repented.

Why? What is the importance of forgiveness for kids?

I cannot even count the number of times one of my boys has spoken “I forgive you” to a relatively unrepentant brother, and both of their faces immediately displayed the change happening in their hearts.

The forgiver, in speaking the words aloud, gave up his right to revenge and removed any potential roots of bitterness. This will make him a healthier, softer, more Christ-like person in the long run.

The forgiven, in hearing the words aloud, is given an undeserved gift, and usually recognizes it for what it is. The kindness, the unmerited forgiveness, that is what leads him to true repentance.

But what if my child’s forgiveness isn’t genuine?

Pardon the confusion here, but it doesn’t really have to be.

Forgiveness and repentance is a process, a dance between two partners with give and take by both.

How many times have you told yourself or someone else that all is forgiven, but really didn’t mean it right away? I’m under no illusion that my kids will always mean it when they say “I forgive you”.

But friend, sometimes you have to fake it till you make it, and forgiveness is just one of those things that takes a while.

Saying the words aloud can be a powerful part of the healing process.

So yes, the child should say, “I forgive you”, as an act of faith. Speaking the words out loud will cause ripples that pull the poison from her heart, and start the process of reconciliation between her and the other child.

So can we make a pact? The next time our kids have a fight (which, let’s face it, is probably happening while we’re reading this), can we encourage them to say “I forgive you” rather than “It’s okay?”.

Because it’s NOT okay.

Hurting each other isn’t okay.

But we can forgive and love each other anyway. That is called grace, and that is what the Kingdom of God is about.

If you’re looking for ways to help your kids grow in their Christian faith without feeling like you have to KNOW it all or DO it all, check out my free guide to starting little, effective faith habits in your family.

I am a mom of three boys, former Children’s Ministry Director, and author. I believe that every Christian mom can confidently nurture deep faith roots in her kids through little habits that add up over time. Learn more about how I can help you here.

What are you looking for?

What others are reading...

9 Amazing Reasons to be a Mom of 3 Boys

Teach Your Child Her Worth Using This Bedtime Ritual

How To Use This One Verse To Help Your Anxious Child

The Little Shoots, Deep Roots community is all about leading our kids to a deeper Christian faith through little faith habits, without feeling like you have to know it all or do it all. We’re about making family faith fun and simple so that your kids love it, and you can feel confident that you're nurturing deep faith roots in your family.

More About Our Community

Are you ready to start your own little family faith habits? Join our community of over 4000 moms and get my free printable, Start Little: 5 Quick Wins To Deepen Your Family's Faith (and how to actually make them stick).